Home / Exhibition Review: ‘Crackling for a Piece of the Moon’ and ‘Pro Forma’

Exhibition Review: ‘Crackling for a Piece of the Moon’ and ‘Pro Forma’

ART SG reviews two new exhibitions at The Drawing Room: Mark Salvatus’s ‘Crackling For a Piece of the Moon’, and Christina Lopez’s ‘Pro Forma’. Examining the nuances of topography and technology, Salvatus’ and Lopez’s presentations are deeply anchored in the contemporary realities and challenges of Filipino life. Their quiet yet insistent interventions in The Drawing Room’s Manila space cast the viewer’s gaze onto new possibilities, towards a world we have yet to win. 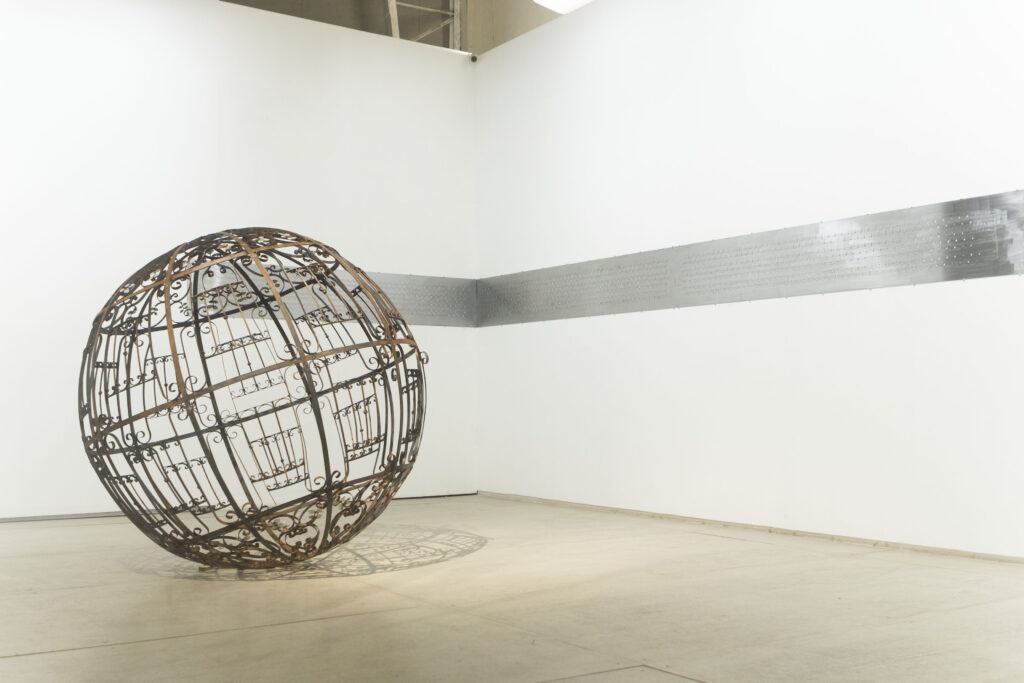 The Drawing Room recently opened two solo exhibitions reflecting on aspects of Filipino existence: Mark Salvatus’s ‘Crackling for a Piece of the Moon’ and Christina Lopez’s ‘Pro Forma’. Salvatus uses a topographical point of view to survey land and space, from his early life in the province to living as an artist in the city. He subtly presented access to land, home, and social justice in works of paper, found objects, and acrylic scratches. Meanwhile, Lopez explores ways of visualizing big data and the vagueness and abstractions of algorithms. She worked on the technologies and ideas used in manufacturing perception that spilled over in the country’s elections. Surprisingly, despite the different trajectories explored in the exhibitions, from the tactility of land to the concept of data, both artists reveal nuances in the lived reality of our experiences, including unequal access to an acceptable quality of life, continuous oppression and exploitation, and deeply embedded social injustice. 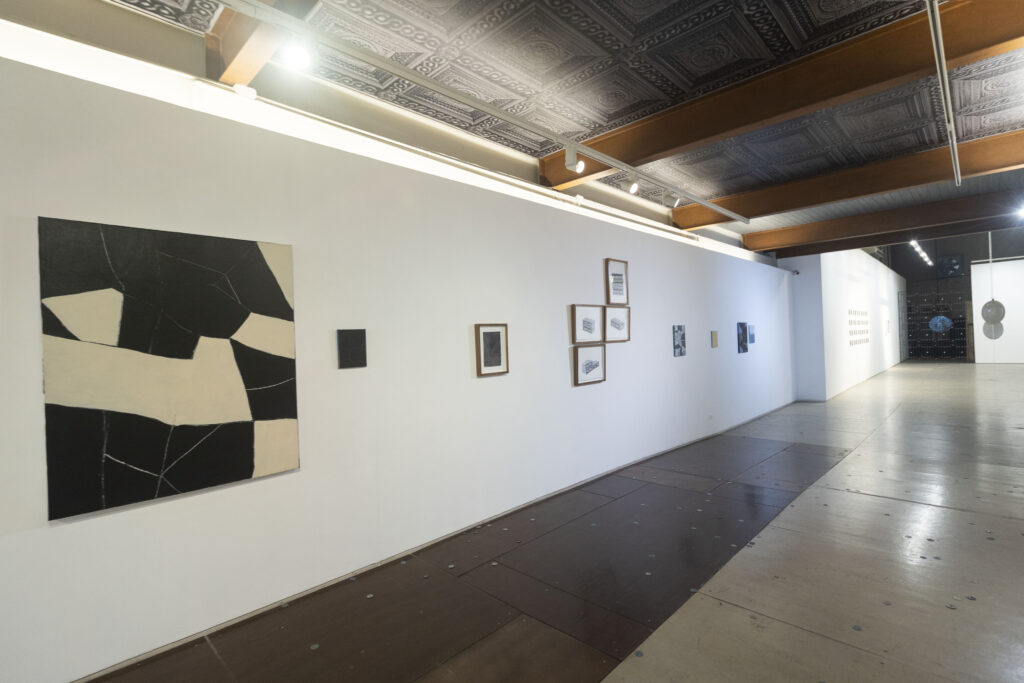 Mark Salvatus, Installation view of Cognitive Map, acrylic on canvas, 2020. Image courtesy of the artist and The Drawing Room Manila 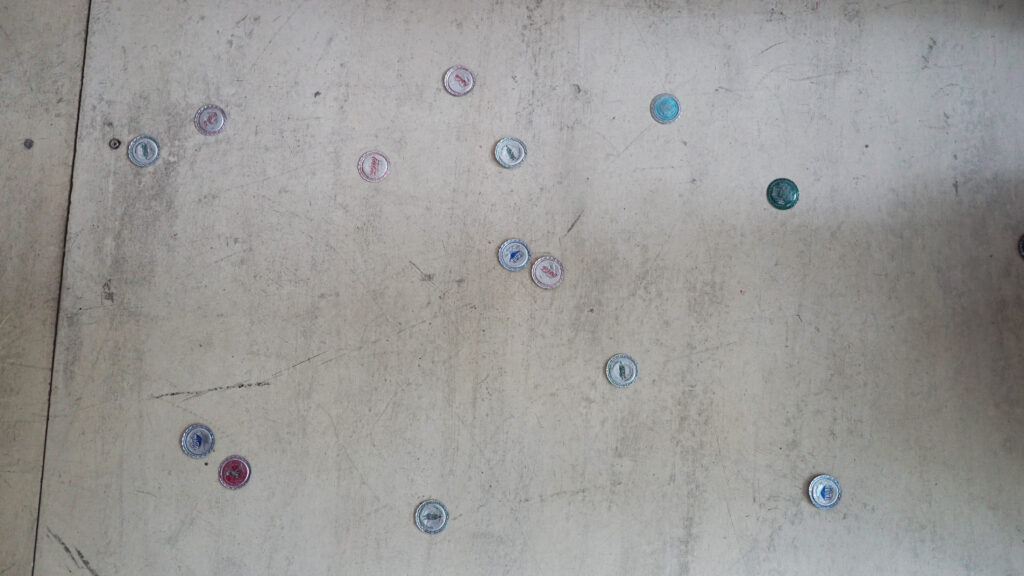 Salvatus uses the long corridor of The Drawing Room, invoking the space as a transitional one towards the main exhibition area. His works are primarily paper and are wall-bound, creating abstractions of land and experience. Land mines, Salvatus’s works of “tansan”, or bottle caps, flattened down with a hammer, disrupt the movement of visitors through the space. Viewers may not notice the small objects and, in turn, step or trip on them and create a subtle scraping sound. This interruption punctuates the typical gallery experience of looking at wall-bound artworks. Salvatus shared that this is his quiet reflection on the injustice of sugar farming in the country, particularly in Negros province. The province suffered greatly towards the end of the Marcos-era years, with joblessness and child malnutrition in the 1980s due to market manipulation and mismanagement. The context is not lost in Salvatus’ conceptual work: with the Marcoses back in politics, the question of the land hangs heavy in the air. 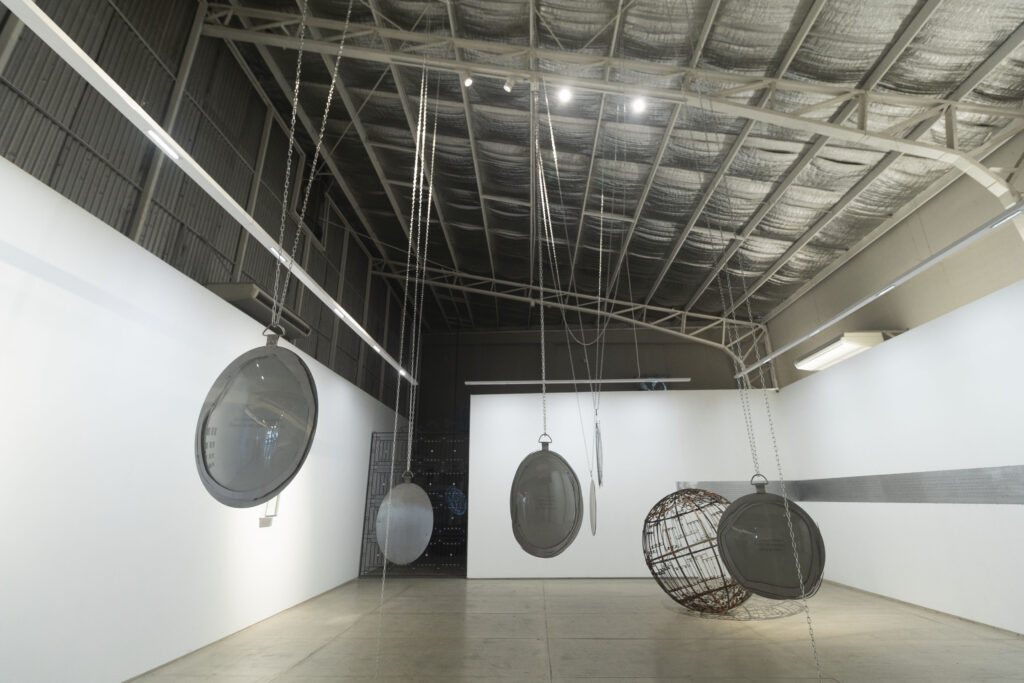 Lopez also hints at the 2022 national elections, drawing heavily on the influence of Cambridge Analytica and social media algorithms in her artworks. After walking through the corridor and tripping on Salvatus’ bottlecaps, the space opens to a broader area that lends itself well to Lopez’s installations. Her untitled work of six hanging frames that mimic pendants, experiments with a 5-point personality test and the theory of eugenics. She used phrases from undesirable traits found in personality tests and had a generative pre-trained transformer to respond with phrases it learned and gleaned from Gabriel Orozco’s obituaries. The results are primarily contradictory and lacking in sense, much like the Filipino experience of the constant manipulation and orchestration of algorithms. Some phrases include, “An emotionally unstable pauper; Defied army and kept his land” and “A deaf hard worker; Devotee of bird song.” Such nonsensical correlations resulted from the programs that were used effectively in forming popular opinion, giving a dark undertone to playful phrases. Lopez also appropriated the concave glasses supposed to liven portraits of the dead in the gigantic pendants, driving home the macabre intent.

Another compelling layer in the two exhibitions are the abstractions that they presented. Salvatus’s scratching series, including Cognitive Map, Tied to the Soil, Sacral Spaces Between Skyscrapers, and An Attempt to Remake the World, look into the idea of land and power struggle. Anchoring these topographic works is the artist’s background of growing up in Lucban, Quezon, a small town at the foot of Mt. Banahaw a few hours away from the capital known for celebrating the harvest festival. There is a palpable exposure and connection to the land. This connection was challenged when Salvatus moved to Manila to study and eventually work, first in advertising and later as a street and contemporary artist. The land in the city is scarce and dominated by power structures and capitalists. His Concrete Encounters series calls back to his street artist personality ‘Boy Agimat’, and the friction of living and creating surrounded by concrete in the city. Land struggle, both in the province and in the city is still a dominant issue in the country. Ordinary Filipinos rarely own the land they till or the home they live in. Salvatus’ play on scratching and abstraction contemplates land struggle, with Built Around Power 1 and Built Around Power 2 showing bubbles and layers where ownership and power could be possible.

Lopez, in turn, tried to visualise the abstract, particularly the processes used in influencing public perception and, eventually, the national elections. In Archetypes, Lopez used pollinations.ai, an open-source AI generative media, to create 40 portraits utilising the data set for brand assessment used by Cambridge Analytica. Such data sets are often mined from social media sites such as Facebook, hiding in seemingly benign things such as games and page likes. She used the Edinburgh etch process to transfer the ghost-like images created by artificial intelligence onto metal plates, similar to the method used in intaglio printing and circuit board making. The unintelligible portraits critiqued the conditions and vagueness that algorithms used to frame the mindset of the Filipino people. Similarly, Suspended Animation (3-point ouroboros) looks into the gaps where the input and result happen in such processes. The glass and metal case with the lightly etched ouroboros contains oil; with lighting, a clearer reflection can be seen in the background. Lopez refers to this as a state of transition, where the process happens. The resolution to the struggle of truth and perception — what is currently being toyed with in the Filipino narrative — is the suspension and transition that lies in between.

Mark Salvatus, Installation view of Crackling for a Piece of the Moon, found vintage photographs, 2022, Image courtesy of the artist and The Drawing Room Manila

Such space between experience and memory is also a critical perspective in Salvatus’s works, as he looks into objects of family history, their place in history, and their translation to the present. Crackling for a Piece of the Moon, Salvatus’s titular installation of found vintage photographs, is his most thought-provoking piece. He derived the title from National Artist Cirilo Bautista’s work The Trilogy of St. Lazarus, an epic poetry project that took 30 years to finish. The trilogy dealt with Filipino life and struggles, the idea of a Filipino soul, and finding the way forward. Salvatus’ installation featured photographs from the 1970s onwards from his family archive, installed with their backs to the viewer. These were discovered when the artist rummaged through drawers after his father’s death last year. The viewer does not see the actual images of weddings, reunions, celebrations of friendships and families, just the annotations and short letters on the backs of the photographs. Within such special, personal moments are the struggles of the Filipino people, alongside the declaration of martial law, episodes of social and economic collapse, and even the breaking point of the EDSA revolution[1]. The photographs are personal mementos without direct political implications. Yet in between the peeling paper and faded notes are the social and political contexts of struggle and resistance. 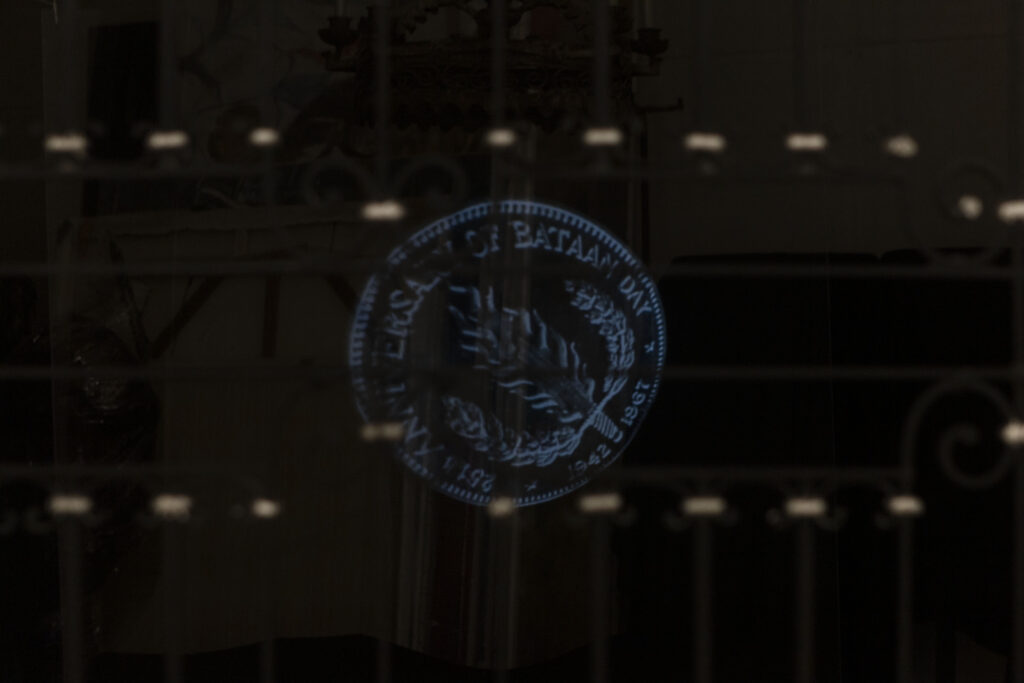 Christina Lopez, Pepper’s Ghost, single-channel video, projected on false wall and bounced off an acrylic sheet, 2022, Image courtesy of the artist and The Drawing Room Manila

Resistance is another touchpoint for Lopez, with WWW, a corroded wrought iron installation that mimics the world wide web logo and the ubiquitous gate of The Drawing Room. Lopez commissioned the work from gate makers but had to do the corrosion herself as the artisans resisted her request. Although the Filipino encounter with the internet and social media has proven to be coercive and manipulative, resulting in the wearing away of democratic processes, Lopez still sees the potential in technology as the way forward. As Lopez stated in her notes, “The outcome to be determined, ours to win.” This converses with her work Pepper’s Ghost, subtly installed inside The Drawing Room gallery gate, with the digital projection away from touch. The projection is an optical illusion of a flipping coin that appears 3-dimensional to the naked eye. Lopez used the Markov chain to determine the coin projected, based on Filipino coins that she collected, scanned, and processed. The Markov Chain is a mathematical concept which lends the randomness and memory-lessness of machine learning to the work. Lopez appears ambivalent about the idea of machine learning, expressing her critique not just in Pepper’s Ghost but also throughout the exhibition. Though problematic in the current situation, the determination of the outcome of emerging technologies could also be a possibility for resistance and inclusive progress. 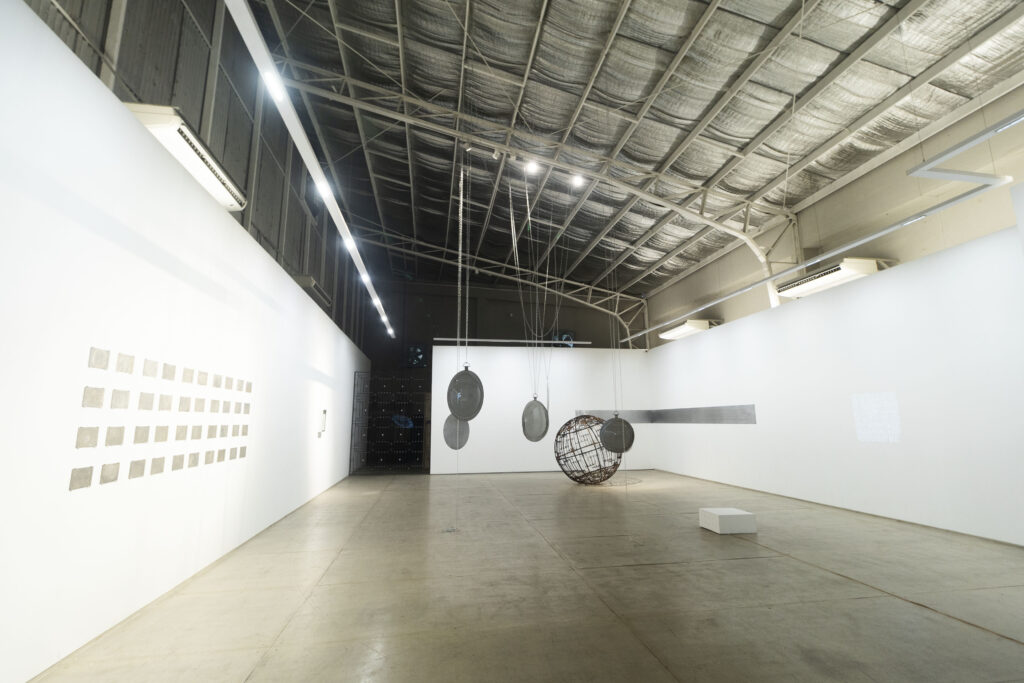 Initially, the two exhibitions felt incongruent with topography and technology sharing one space. Yet, both artists’ sensitivity to lived experience, social struggle, and injustice led them to similar thoughts and outcomes after two radically different journeys. Whether we are talking about the lack of access to land where people work and live or the manipulations of big data and algorithms in emerging technologies, these presentations are anchored to what affects the Filipino way of life, encounters, and experiences. Many may protest the lack of fairness in the election, and the path forward is unclear. Still, the nuances presented by Salvatus and Lopez are crumbs toward possibilities: their artworks are quiet, elegant, and leaning towards the conceptual, yet deeply anchored to reality and difficulties, and hopefully, a world we have yet to win.

[1] The EDSA Revolution of 1986 removed the dictator Ferdinand Marcos Jr. from presidency through peaceful people power. Filipinos marched on the streets, congregating in EDSA, the main thoroughfare in Metro Manila, and faced soldiers and tanks as they called for Marcos’s removal from power.

ABOUT THE AUTHOR: PORTIA PLACINO

Portia Placino is an arts educator and writer based in Manila. She received the Ateneo Art Awards – Purita Kalaw Ledesma Prize for Art Criticism in 2021. Previous engagements include a writing fellowship for Kritika and a research fellowship at the National Museum of Modern and Contemporary Art (MMCA) in Korea. She contributes to ArtAsiaPacific and actively lectures on art history and research in various art schools and institutions. Her recent projects contemplate the position and influence of contemporary art, new media, art history, and theory in an embattled and oppressed society. 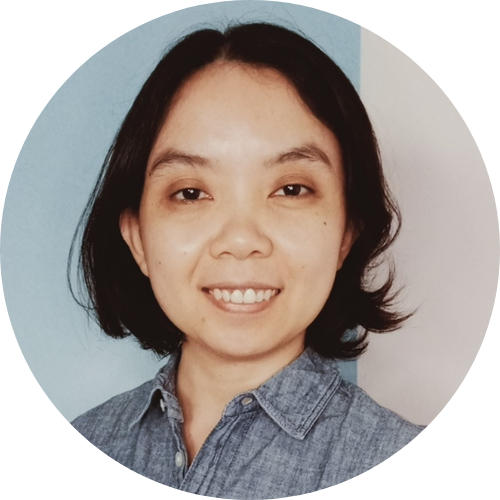