“As the art world attempts to reconfigure art history to make space for new narratives, examining the life and work of Kim Lim in her own context and in the context of today’s scholarship is vital.”

Kim Lim: Carving and Printing is on view at Tate Britain until 5 March 2021.

We would like to thank the Kim Lim Estate, Turnbull Studio, Tate Britain and Elena Crippa for making this event possible. 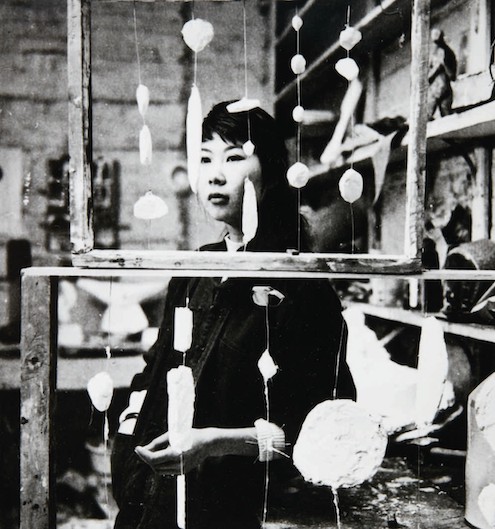 Kim Lim in her Studio with Abacus Works. Courtesy of the Kim Lim Estate, Turnbull Studio.

Bianca Chu is an independent curator and art consultant based in London. Born in New York, Bianca previously worked in the commercial art sector for ten years at Christie’s and then Sotheby’s, where she was the deputy director of S|2 Gallery, the exhibition arm of the auction house. There, she co-curated over twenty exhibitions and produced a number of publications, including the first major publication on Kim Lim in over two decades. Currently, Bianca is special projects advisor and representative of the Kim Lim Estate, Turnbull Studio, London; Co-Chair of the Tate Young Patrons; and a consultant for Procreate Project, a non-profit organisation with a social impact, supporting artists who are mothers. She is currently completing a Master’s in Anthropology at UCL in Material and Visual Culture and her research practice centres around marginalised art histories, systems of value and collecting, and the contemporary art market. For further information, please visit www.biancachu.net.

Hammad Nasar is a London-based curator, researcher and strategic advisor. He is presently Senior Research Fellow at the Paul Mellon Centre for Studies in British Art (part of Yale University) where he co-leads the ‘London, Asia’ project; Principal Research Fellow at the University of the Arts London; and co-curator of British Art Show 9 (2021-22) – Britain’s largest exhibition of contemporary art organised every five years by Hayward Gallery Touring. He was the inaugural Executive Director of the Stuart Hall Foundation, London (2018-19); Head of Research & Programmes at Asia Art Archive, Hong Kong (2012-16); and, co-founded (with Anita Dawood) the pioneering arts organisation, Green Cardamom, London (2004-12).

Known for collaborative, research-driven and exhibition-led inquiry, he has curated or co-curated more than 30 international exhibitions. His most recent exhibition projects include: Speech Acts: Reflection-Imagination-Repetition (2018-19) at Manchester Art Gallery; Structures of Meaning|Architectures of Perception (2018-19) as guest curator for the 2018 edition of Abu Dhabi Art; and Rock, Paper, Scissors: Positions in Play – the UAE’s national pavilion at the 57th Venice Biennale (2017).

Nasar is a member of the board of Mophradat (Belgium), and of the editorial board of Tate’s magazine, Tate Etc. He has also served in juries, boards and advisory roles for numerous organisations internationally, including: Art Basel (Switzerland); British Council, Delfina Foundation, Iniva, Manchester Art Gallery, V&A Museum, and Whitechapel Gallery (UK); and Alserkal Avenue (UAE).

Patricia Chen is writer and filmmaker who points the camera at a subject close to her heart : the visual arts. She has penned columns and essays on art and the Southeast Asian art scene for ArtAsiaPacific, Financial Times, The Art Newspaper and Flash Art.  Ms. Chen’s abiding interest in collections of Asian art with social footprints led her to author Uli Sigg in Conversation: Collecting Chinese Contemporary Art and produce the films, Uli Sigg: China’s Art Missionary and The 24-Hour Art Practice. Screened to critical acclaim in the Netherlands, France, Hong Kong, Indonesia, and Singapore, they brought the knotty issues of private cultural ownership and public legacies to the fore. Whether in text or in film, Ms. Chen plays the role of a critical cultural observer and silent moderator; her work is marked by her relentless pursuit of fair and open discussions on cultural matters. She currently sits on various jury and advisory committees relating to art from Southeast Asia and is currently producing an independent film on respected art historian, T.K. Sabapathy.

Magnus Renfrew has twenty years’ experience in the international art world, the last decade of which have been spent in Asia. Previously, Renfrew served as founding fair director for ART HK: Hong Kong International Art Fair (2007-2012) and Art Basel in Hong Kong (2012-2014). In January 2019, he launched new contemporary art fair, Taipei Dangdai, where he serves as Co-Director alongside Robin Peckham. Renfrew has been widely recognized for his contribution by art industry media and has been named twice in ArtReview as one of the 100 most influential people in the international art world. In 2013, he was honoured as a Young Global Leader by the World Economic Forum. In 2016, Renfrew founded the ARTHQ / Group, a leading service provider for the art world with offices in Hong Kong and London. In 2017, his book ‘Uncharted Territory: Culture and Commerce in Hong Kong’s Art World’ was published by Penguin. Renfrew has previously served on the Hong Kong Arts Development Council, and as Chair of the Advisory Council for Para Site Art Space in Hong Kong.

Want to keep up to date with the latest ART SG news? Enter your details to be added to our mailing list.

We take your privacy seriously and never share your data. You can update your preferences and unsubscribe at any time.